An Under the Sea Christmas

This week we had a chance to experience Christmas in a different way; under the sea! Yesterday, Ez and I woke up, had breakfast and got ready to make the trek to Vancouver with Nat, from The Venture Creative, and her sweet boy. Our first stop, obviously, was coffee, then we made our way down town, over the bridge, and then another bridge, made the loop around Stanley Park and landed at the Vancouver Aquarium! Oh how excited we were to a) finally arrive and b) to experience their newly renovated space and CHRISTMAS UNDER THE SEA!

We first made our way over to reception and were greeted by April, she was so pleasant, full of smiles and was great with our two little ones. She then took us on a tour through the different spaces and regions of the Aquarium, making sure we didn’t miss anything when we were on our own exploring later on! One of my favourite things that she showed us (amongst the many others) was a mistleTOAD. Hillarious and genius!!

During our tour April touched on a variety of different projects that VanAqua has going on right now and what an impact they are making in our waters today. One of which was a piece of art made by an artist in Tofino named Pete Clarkson, both of the children loved to look at, was the the Marine Debris Christmas Tree.  “This unique tree is made from a variety of ocean plastics collected from shorelines on the west coast of Vancouver Island. This impressive work of art stands as a reminder of the plastic debris littering our oceans and its harmful impact on marine animals and ecosystems. Most importantly, the tree encourages thoughtfulness about unnecessary plastic use during the holiday season and throughout the year.” – Vancouver Aquarium

Now, I don’t want to give everything away, but this. Was. Awesome. So awesome that Nat and I both gasped when it happened the first time. It is Vancouver’s most ‘shocking’ holiday display while standing in the glow of the Electric eel-powered Christmas tree in the Teck Connections Gallery. NOW. I won’t tell you how they do it, you’ll just have to go and see the magic for yourself!

This turtle above was at least 100LBS – I couldn’t believe it! Ez and Ky were just mesmerized with this giant creature. Above pics by Nat @theventurecreative.co

For this part of the festivities, we decided to opt out of because of the age of Ez and Ky. They recommend that children be a bit older, but that’s alright! they just had more time at the Jelly Globe! Visitors enjoy the wave of childlike wonder as they watch Rudolph the Red-Nosed Reindeer for the first time in the 4-D theatre. Cool wind pinches cheeks as snow falls all around; Rudolph’s epic adventure comes alive with wondrous sights, sounds, and sensations. – Vancouver Aquarium

And of corse here we are, one of the coolest spots in the entire Aquarium, the Jelly Globe. All of the surrounding tanks were just as popular and just as enticing and exciting. Ez and Ky were running around side to side, throwing their hands up on the glass and yelling WOOOW and WOOAHH. To see their little hearts bursting, their minds racing and their little bodies shaking with excitement, now THAT was worth the entire trip itself. To sit and just watch her stare in awe at this giant tank, looking so far up you think she’d fall over, just completely captivated by them. Also, the obvious silhouette photo-op, because, DUH. VanAqua has done such an amazing job featuring and showcasing the many beautiful creatures in their space, especially for christmas time!

You may also like 10 Tips to starting a capsule wardrobe

This was a new one for the books, I must have missed a few visits to the Aquarium, because they had Scuba Claus returning this year, and this was my first time meeting him! what a show this was! The VanAqua team did such an amazing job at putting this show together for all the children there. From the speaker who described Santa’s journey and the man in the Red…wetsuit, they we re a great team and each and every child had a grin from cheek to cheek! Even though my little Ez wouldn’t go near him and in fact asked to get back in the stroller haha! She’ll figure it out that he ‘brings her presents’ and I have a feeling things will change. *Remember, if you are planning to go visit Scuba Claus, he is only there until December 24th and then returns home after Christmas!*

There is also a chance to pose with Scuba Claus at the ocean court yard and then again at the Forest Kelp Maze.

We had such an amazing time experiencing what Christmas looks like under the sea and will definitely be back soon – like, I mean, next week soon. It is one of the best things to do indoors with your kidlets while the weather is so frosty! So if you’re looking for a side kick to kick it with, lemme know 😉 Thank you again Vancouver Aquarium for having us come for a visit, it is truly such a magical place, every time of the year.

If you are as excited as I am about having your very own experience this Holiday, click here for more details on shows and tickets to Christmas under the sea! 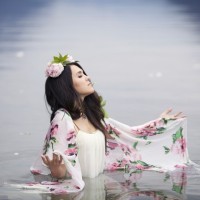 A Life & Style Blog for the Socially Conscious Woman